Listed below are brief descriptions of each of the 16 radon measurement methods that have been identified by the U.S. EPA and were used in EPA’s former RPP. The following descriptions are divided into methods appropriate for measuring radon gas and radon decay products, respectively.

For this method, an airtight container with activated charcoal is opened in the area to be sampled and radon in the air adsorbs onto the charcoal granules. At the end of the sampling period, the container is sealed and may be sent to a laboratory for analysis.

The gamma decay from the radon adsorbed to the charcoal is counted on a scintillation detector and a calculation based on calibration information is used to calculate the radon concentration at the sample site. Charcoal adsorption detectors, depending on design, are deployed from 2 to 7 days. Because charcoal allows continual adsorption and desorption of radon, the method does not give a true integrated measurement over the exposure time. Use of a diffusion barrier over the charcoal reduces the effects of drafts and high humidity.

For this method, the detector is a small piece of special plastic or film inside a small container. Air being tested diffuses through a filter covering a hole in the container. When alpha particles from radon and its decay products strike the detector, they cause damage tracks. At the end of the test the container is sealed and returned to a laboratory for reading.

The plastic or film detector is treated to enhance the damage tracks and then the tracks over a predetermined area are counted using a microscope or optical reader. The number of tracks per area counted is used to calculate the radon concentration of the site tested. Exposure of alpha track detectors is usually 3 to 12 months, but because they are true integrating devices, alpha track detectors may be exposed for shorter lengths of time when they are measuring higher radon concentrations.

This phenomenon lessens, but does not totally compensate for the dependency of the calibration factor on equilibrium ratio. For this reason, EPA currently recommends that these devices not be used when the equilibrium fraction is less than 0.35 or greater than 0.60 without adjusting the calibration factor. EPA is currently evaluating this device further to determine more precisely the effects of equilibrium fraction and other factors on performance. These evaluations will lead to a determination as to whether to finalize the current protocol or remove the method from the list of Program method categories.

4. LS - Charcoal Liquid Scintillation
This method employs a small vial containing activated charcoal for sampling the radon. After an exposure period of 2 to 7 days (depending on design) the vial is sealed and returned to a laboratory for analysis. While the adsorption of radon onto the charcoal is the same as for the AC method, analysis is accomplished by treating the charcoal with a scintillation fluid, then analyzing the fluid using a scintillation counter. The radon concentration of the sample site is determined by converting from counts per minute.
5. BC - Blind Continuous Radon Monitor

A Blind CRM is one for which the data collected cannot be accessed (viewed, downloaded or printed) by the field technician in any manner until AFTER it has been transmitted to an analysis lab for processing and report generation.  Typically, the raw data collected by the CRM is transmitted via a direct upload to the analytical laboratory where it is processed, converted to a test report and reviewed for anomalies before being electronically delivered to the field technician and the client on his/her behalf.  To be clear, if the field user can access and see the test results on a display screen, smartphone, computer, or printed paper BEFORE the laboratory has processed and reviewed the data, it is NOT a blind CRM.

This method category includes those devices that record real-time continuous measurements of radon gas. Air is either pumped or diffuses into a counting chamber. The counting chamber is typically a scintillation cell or ionization chamber. Scintillation counts are processed by electronics, and radon concentrations for predetermined intervals are stored in the instrument’s memory or transmitted directly to a printer.

For this method, an electrostatically charged disk detector (electret) is situated within a small container (ion chamber). During the measurement period, radon diffuses through a filter-covered opening in the chamber, where the ionization resulting from the decay of radon and its progeny reduces the voltage on the electret. A calibration factor relates the measured drop in voltage to the radon concentration. Variations in electret design determine whether detectors are appropriate for making long-term or short-term measurements. EL detectors may be deployed for 1 to 12 months. Since the electret-ion chambers are true integrating detectors, the EL type can be exposed at shorter intervals if radon levels are sufficiently high.

For this method, an electrostatically charged disk detector (electret) is situated within a small container (ion chamber). During the measurement period, radon diffuses through a filter-covered opening in the chamber, where the ionization resulting from the decay of radon and its progeny reduces the voltage on the electret. A calibration factor relates the measured drop in voltage to the radon concentration. Variations in electret design determine whether detectors are appropriate for making long-term or short-term measurements. ES detectors may be deployed for 2 to 90 days. Since electret-ion chambers are true integrating detectors, the ES type can be exposed at longer intervals if radon levels are sufficiently low.

This method requires a skilled technician to sample radon by using a pump or a fan to draw air through a cartridge filled with activated charcoal. Depending on the cartridge design and airflow, sampling takes from 15 minutes to 1 hour. After sampling, the cartridge is placed in a sealed container and taken to a laboratory where analysis is approximately the same as for the AC or LS methods.

This method uses a sample bag made of material impervious to radon. At the sample site, a skilled technician using a portable pump fills the bag with air, then transports it to the laboratory for analysis. Usually, the analysis method is to transfer air from the bag to a scintillation cell and perform analysis in the manner described for the grab radon/scintillation cell (GS) method below.

For this method, a skilled operator draws air through a filter to remove radon decay products into a scintillation cell either by opening a valve on a scintillation cell that has previously been evacuated using a vacuum pump or by drawing air through the cell until air inside the cell is in equilibrium with the air being sampled, then sealed. To analyze the air sample, the window end of the cell is placed on a photomultiplier tube to count the scintillations (light pulses) produced when alpha particles from radon decay strike the zinc sulfide coating on the inside of the cell. A calculation is made to convert the counts to radon concentrations.

For this method, a sample bag impervious to radon is filled over a 24-hour period. This is usually accomplished by a pump Programmed to pump small amounts of air at predetermined intervals during the sampling period. After sampling, analysis procedures are similar to those for the GB method.

For this method, a known volume of air is pulled through a filter, collecting the radon decay products onto the filter. Sampling time usually is 5 minutes. The decay products are counted using an alpha detector. Counting must be done with precise timing after the filter sample is taken. The two counting procedures most commonly used are the Kusnitz and the Tsivoglou methods described in the Indoor Radon and Radon Decay Product Measurement Device Protocols.

For this method, a low-flow air pump pulls air continuously through a filter. Depending on the detector used, the radiation emitted by the decay products trapped on the filter is registered on two thermoluminescent dosimeters (TLDs), an alpha track detector, or an electret. The devices presently available require access to a household electrical supply, but do not require a skilled operator. Deployment simply requires turning the device on at the start of the sampling period and off at the end.

The sampling period should be at least 72 hours. After sampling, the detector assembly is shipped to a laboratory where analysis of the alpha track and electret types is performed using procedures described for these devices (AT, EL, and ES) elsewhere in this appendix. The TLD detectors are analyzed by an instrument that heats the TLD detector and measures the light emitted. A calculation converts the light measurement to radon concentrations.

How Electrets Are Analyzed 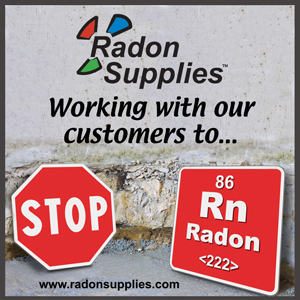 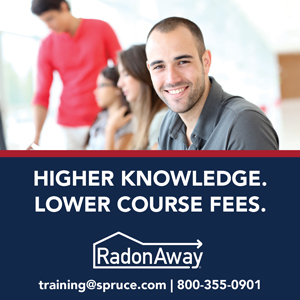 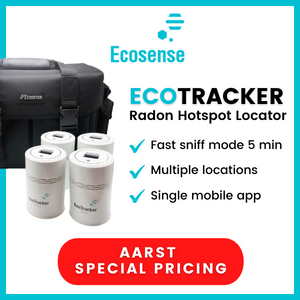 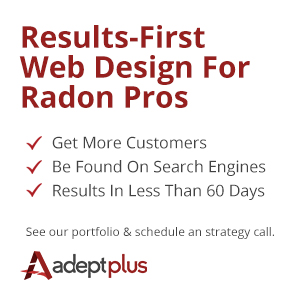 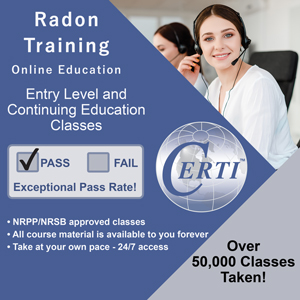 The new NRPP Soil Gas Mitigation Compliance Inspector (SGM-CI) Exam and Certification are now live. This credential is targeted for those

To maintain listing of an approved device, manufacturers are to submit devices to an NRPP approved secondary chamber for a